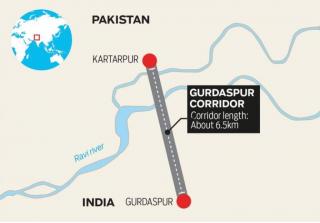 •The corridor – often dubbed as the “Road to Peace” – will connect Gurdwara Darbar Sahib in Pakistan’s Kartarpur with Dera Baba Nanak shrine in India’s Gurdaspur district. •The construction of the corridor will allow visa-free access to pilgrims from India. The proposal for the corridor has been on the table since 1988, but!!•Pakistan has agreed in principle to allow visa-free, year-long travel to the Sikh shrine.•The gurdwara in Kartarpur stands on the bank of the Ravi, about 120 km northeast of Lahore.•It was here that Guru Nanak assembled a Sikh community and lived for 18 years until his death in 1539.[Pakistan is planning to charge $20 per pilgrim.It has also not agreed to the initial number — 10,000 pilgrims that India proposed. ]

●Permanent Commission (PC) to Women Officers in the Indian Army
•Recently, the Ministry of Defence has issued the formal Government Sanction Letter for grant of Permanent Commission (PC) to Women Officers in the Indian Army
•Under the SSC scheme, women were commissioned into the Army for a period of 10 years, extendable up to 14 years
•While male SSC officers could opt for permanent commission at the end of 10 years of service, this option was not available to women officers
[Women officers were kept out of any command appointment and could not qualify for a government pension, which starts only after 20 years of service as an officer]
•The case was first filed in the Delhi High Court by women officers in 2003 and had received a favourable order in 2010

Extra Learning
•The order specifies grant of PC to Short Service Commissioned (SSC) Women Officers in the remaining 8 streams of the Indian Army.
•These 10 streams include Army Air Defence (AAD), Signals, Engineers, Army Aviation, Electronics and Mechanical Engineers (EME), Army Service Corps (ASC), Army Ordnance Corps (AOC), Intelligence Corps, Judge and Advocate General (JAG) and Army Educational Corps (AEC).
•Before the order, women officers are allowed a PC in the JAG and AEC.
•In anticipation, the Army Headquarters had set in motion a series of preparatory actions for the conduct of the Permanent Commission Selection Board (PCSB) for the eligible women officers.
•The Selection Board will be scheduled as soon as all eligible SSC Women Officers exercise their option and complete requisite documentation.
•The case was first filed in the Delhi High Court by women officers in 2003 and had received a favourable order in 2010.
However, the order was never implemented and was challenged in the Supreme Court by the government.
•In its appeal, the government cited “physical” and “physiological limitations” in granting command positions to women.
•In the February 2019 policy statement, the Government endorsed the PC for SSC women officers in 10 streams of the ‘Combat Support Arms’ and ‘Services’ sections.
•However, it was said that the women officers would not be offered any command appointments, and would serve only in staff posts.
•In February 2020, the SC held that there is a need for an administrative will and ‘change of mindset’ and directed the government to grant PC and command postings in all services other than combat to women Army officers.