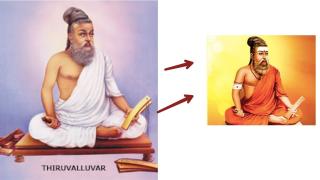 •Thiruvalluvar, commonly known as Valluvar, was a celebrated Tamil poet and philosopher.• He is best known as the author of Thirukkuṛaḷ, a collection of couplets on ethics, political and economical matters, and love. The text is considered an exceptional and widely cherished work of the Tamil literature•Recently, the Tamil Nadu BJP kicked up a controversy by tweeting a picture of the ancient Tamil saint Thiruvalluvar in a ‘Hindu’ style, replacing his usual white shawl with a saffron one, and adding Hindu symbols such as ‘vibhuti’ in the picture●Shaala Darpan portal:•Human Resource Development ministry has launched Shaala Darpan portal.•It is an E-Governance school automation and management system for Navodaya Vidyalaya Samiti (NVS) in New Delhi.It is an end to end e-Governance school automation and management system.•It is a database management portal, where information about all government schools and education offices is kept online and updated as a continuous process

0
Thiruvalluvar & controversy by tweeting a picture in a ‘Hindu’ style
Share!